The Arsenal PR-01 Handguard minimizes weight while providing maximum strength by using a triangular support design and utilizing aircraft-grade aluminum construction. The Picatinny-style quad rails on the bottom and sides have 14 slots, with nine slots on the top, all with identification marks for quick repeat attachment of accessories. The PR-01 will fit both milled and stamped receivers, and it is designed to accept a cleaning rod with the handguard installed. (Arsenal inc 702-643-2220)

Arsenal’s SM-13 side-attaching ak 47 scope mount for AK variants is used by foreign militaries. The one-piece, CNC-machined mount is constructed of aircraft-grade aluminum, so it is strong yet lightweight—only 5.7 ounces. The Picatinny rails give users more than 7.5 inches of rail space to mount a variety of optics. The locking mechanism offers quick and easy installation and removal with no loss of zero. (Arsenal inc 702-643-2220)

B-Square Military bases are made of anodized aluminum with a durable blue finish. Mounts right over the top of the receiver so it cannot be used with open sights (except Springfield 1903, which is a see-through design). Comes with two 1″ InterLock (Weaver-Style) rings. This scope mount fits Chinese imported AK-47 and Mak-90 rifles. Lightweight and rugged, the mount is made from 6061-T6 aluminum. No gunsmithing is required, allowing quick and easy installation.(B Square; 800-347-1200)

The AK Mini Dot Mount from Midwest Industries mounts to the rear sight of standard ak 47 scope mount and AK-74 rifles with no complicated gunsmithing required. The mount allows a user to install a small red-dot sight while still being able to use the iron sights. The mount has a rear sight built in. The top cover can be removed with the mount in place. (Midwest Industries inc; 262-896-6780)

The Midwest Industries Extended AK-SSK KeyMod Handguard fits most AK-47s, AK-74s and other variants as well as stamped or machined receivers. The lower rail extends 9.5 inches for an additional mounting surface and features five anti-rotational, quick-detach sockets for push-button swivels. One 2.1-inch KeyMod rail is included. The 11.4-ounce handguard is made from 6061 aluminum and is hardcoat anodized. (Midwest Industries inc; 262-896-6780) 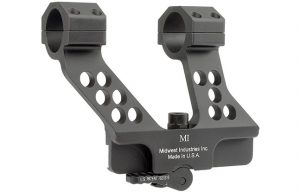 Midwest Industries AK 30mm Scope Side Mount attaches to AK rifles with built-in receiver mounts by using its ADM Auto Lock System, which uses a lever to clamp on the mount/scope. The unit accepts scopes with 30mm tubes, and reduction rings for one-piece tubes are available. (Midwest Industries inc; 262-896-6780)

This Tactical Weaver-Style Tri-Rail Mount allows for the mounting of a scope and accessories to your AK-47. It replaces the existing receiver cover and includes 2 adjustable side mount tabs for accessories such as a flashlight or laser.

Parabellum Armament’s AKARS (AK Advantage Rail System) unit replaces the rear sight leaf and the receiver’s top cover on most AK-47 and AK-74 rifles,
allowing users to easily mount optics including scopes, red dots, infrared sights and others. The cover integrates a Picatinny-style rail, and even when the cover is removed for maintenance the optic will retain its zero. The cover also allows for the use of iron sights since the AKARS has a built-in rear sight aperture. (Parabellum Armament; 844-927-4327)

The AK-BAR (AK Battle Action Rail) interfaces directly with Parabellum Armament’s RCS, giving it a secure mounting point to free-float the barrel. The AK-BAR features a Picatinny rail along the top and multiple KeyMod slots. The handguard has a width of 1.5 inches, giving it a thin, sleek feel. The magazine guide ramp assists users with reloads. Easy to install, the AK-BAR is made from hardcoat anodized 6061-T6 aluminum. (Parabellum Armament; 844-927-4327)

The rugged AK-300 Modular Side Mount will work on all side-rail-equipped AK rifles.  Similar to the Russian design, the patented AK-300 mount uses a throw lever that clamps onto the side rail of the receiver. As a result, the system allows users to mount optics centered over the bore and be mounted low enough that iron sights can be co-witnessed through a red-dot. The top cover can still be removed to disassemble the rifle without removing the mount. Made from Type 3 hardcoat anodized 6061-T6 aluminum, it features a titanium-based locking system. (RS Regulate)

The Scout Scope Mount Kit requires no drilling or tapping. The universal base attaches to the AK’s rear sight mount with no permanent alterations required. When installed, the mount provides the optimum eye relief for a red-dot sight or a forward-mounted scout scope. There’s also no need to remove the mount to perform routine maintenance and field-stripping. (Scout Scopes; 512-658-6930)

The AK Rear Sight Rail for Low Profile Red Dot Optics from Strike Industries easily converts the rear sight of most AKs into a Picatinny rail that is designed specifically forlow profile red dot optics from Burris, Trijicon, Aimpoint and others. No gunsmithing required. The rail is constructed of aircraft-grade 6061 aluminum with a hardcoat anodized finish. (Strike Industries) 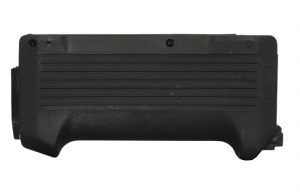 The TAPCO Galil Style Handguard offers horizontal grooves for a better grip than standard military-style handguards. The handguard is manufactured from high-strength, reinforced composite and is compatible with most AK-style rifles. It also offers better ventilation to reduce barrel heat during sustained fire. Color choices include dark earth and black. (Tapco; 800-554-1445) 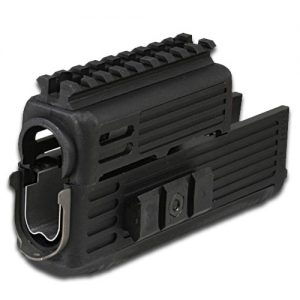 Tapco Intrafuse AK-47 Handguard Quadrail –  Are you tired of your AK being bare bones? Are you fed up with seeing everyone else’s AK outfitted with extra accessories, only to have to settle for your boring rifle? Well, the INTRAFUSE® AK Handguard is here to save you from any more embarrassment. The lower handguard comes with a concealed Picatinny rail on the bottom, two pre-installed side rails, and a heat shield. Throw in a matching upper handguard with a Picatinny rail, add a bit of style and functionality and you’ve got the perfect handguard to install any light, laser, vertical grip, kitchen sink or whatever else your heart desires. Okay, maybe not the kitchen sink. See Specs for information on MAK-90. 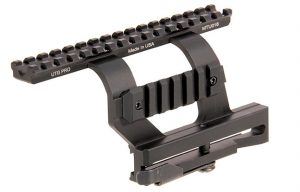 The UTG Pro Quick-detachable AK Side Mount ak 47 scope mount is made in the U.S. out of high-quality, aircraft-grade aluminum. The side mount is compatible with most AK-type rifles with side rail mounts. Slide the mount onto the dovetail and use the ergonomic quick lock/release lever with adjustable tension to tighten in place. The top rail has 16 Picatinny slots, plus it has a deep U-shaped cut in the top rails, allowing an operator to use iron sights and optics. (UTG/leapers; 734-542-1500)