MDT TAC21 20 inch Suppressed Modular Rifle – I decided to kick off the relaunch of this site with an entry level project of readily available hardware, nothing custom. As a barreled action I decided to use a Remington Model 700 SPS Tactical AAC-SD rifle at a cost of $650. The Remington Model 700 SPS Tactical AAC-SD has a threaded muzzle to accept an AAC-SD Sound Suppressor. I just happen to have an AAC 762-SDN-6 on hand.

The rifle will be based on the Remington Model 700 Tactical Chassis with the key difference being a shorter 20″ threaded barrel.

Remington Model 700 SPS Tactical AAC-SD features a Pillar bedded Ghillie Green Hogue over-molded stock. Heavy contour barrel has a 5/8-24 inch threaded muzzle to accept all AAC suppressors, flash hiders and muzzle brakes as well as other manufacturers of similar accessories. Shipped with a thread protector installed to shoot right out of the box or for the easy addition of accessories. Rate of twist, laser etched on the barrel, is optimized at 1:10 inches to stabilize 168 to 220 grain bullets as well as sub-sonic loads. X-Mark Pro externally adjustable trigger is set at the factory at 3 1/2 pounds with a 2 pound range of adjustment

Note: Special thanks to the fine folks at Modular Driven Technologies for helping get this project off the ground by answering emails, a lot of them. 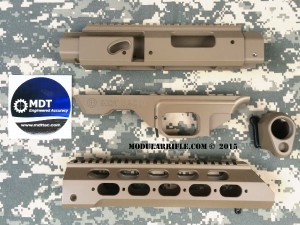 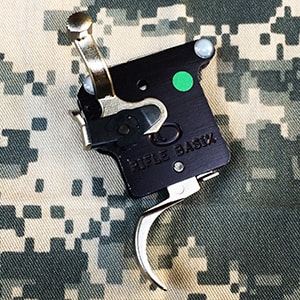 We know we could always go with the safe bets of Timney Triggers and Jewell Triggers, however the Rifle Basix Remington Trigger Erv-3 K was selected mostly because we have not previously tested this trigger, the price is fair and it is readily available. We shall see how it performs.

Rifle Basix Remington Trigger Erv-3 K Remington after-market triggers feature state of the art CNC machined housings made from T6 6061 billet aluminium and are black anodized for a factory appearance. All internal levers are investment cast from A-2 tool steel, CNC machined and heat treated for excellent wear characteristics. The levers are now electro nickel plated for extra protection and bright appearance. Each Rifle Basix Remington trigger is hand assembled, mounted on a test action, adjusted within advertised specifications, tested for proper operation and safety function before packaging. These triggers are guaranteed as long as they are in service, and may be repaired or replaced at no charge at any time (providing they have not been modified). Rifle Basix Remington triggers are designed for USER installation. No cutting, grinding, fitting or stock modification for adjustment screw clearance. These triggers feature wide (factory width) finger levers. Rifle Basix triggers are designed to utilize Remington’s original safety levers both right and left hand. New mounting pins are shipped with each trigger. Our new “K” kits are packaged with safety levers and bolt stop release to service the 2006 and later Remington rifles with their new trigger design. Right hand only.

This Advanced Armament AR-15/M16/AR 308 Style Blackout 51T Muzzle Brake 102320 is the only option I can utilize with my rifle and suppressor combination. 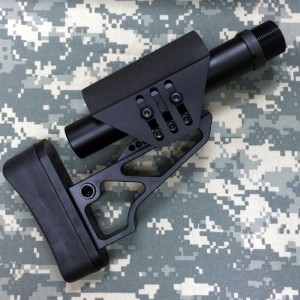 One of the appeals of a modular rifle chassis like the MDT TAC21 is the ability to utilize an AR15 stock. I like a that idea a lot. I had originally considered installing a Magpul PRS. I like the PRS except for one thing, the weight. It comes in a nearly 2 pounds. Not set on a PRS I began looking around and I noticed a majority of the TAC21 builds utilize a PRS. So in an interesting twist I decided to go with the XLR Industries Tactical Lite Butt Stock. XLR Industries is also a manufacturer of modular rifle chassis. The Tactical Lite Butt Stock installed comes in about a half pound lighter than the Magpul PRS. Now it’s important to note that MDT offers a stock specifically for the TAC21 Chassis. The stock, the MDT Skeleton Rifle Stock V2 is essentially what appears to be a skeletonized PRS designed to only fit the TAC21 and not AR15 or AR10 rifles. 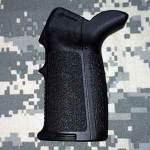 The Magpul MIAD Pistol Grip was an easy selection. I like them and always have a few laying around.

The folks at B&T Industries, the manufacturers of the Atlas PSR line of Bipods were outstanding to deal with as I decided which bipod was best for this project. The Atlas Bipod BT46 LW17 is impressive in quality and function. One of the most expensive bipods available but worth every penny. 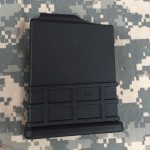 Modular Driven Technologies provided us with this magazine. If all the reviews turn out to be true the MDT AICS Style 10RD 308 Polymer Magazines at $39.99 will be an absolute bargain for folks shooting an AICS compatible platform.

Vortex Optics have become tremendously popular in recent years. Performance at a given price point is said to be comparable to more expensive competition.  I have zero experience with the brand so I figure what the heck. The Vortex Viper PST 4-16×50 Riflescopes with EBR-1 MOA PST-416S1 should suit my needs perfectly. 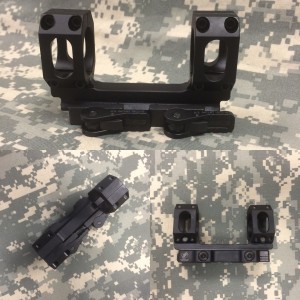 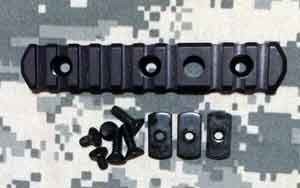