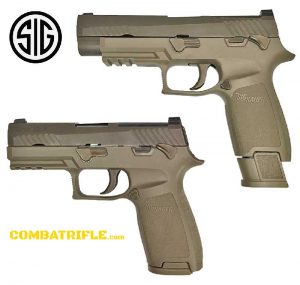 SIG Sauer has announced its Model P320 will be replacing the U.S. Army’s use of the Beretta M9 service pistol. The Beretta M9 has been used since the mid-1980s.

SIG’s P320 was released in 2014. It is a polymer striker-fired pistol and is the first modular pistol with interchangeable grip modules that can also adjust in frame size and caliber.

The Modular Handgun System (MHS) Program in New Hampshire provides both full size and compact P320 pistols over a period of 10 years. All pistols will be configurable to receive silencers and include standard and extended capacity mags.

“I am tremendously proud of the Modular Handgun System Team,” Army Acquisition Executive Steffanie Easter said in a press release. “By maximizing full and open competition across our industry partners, we truly have optimized the private sector advancements in handguns, ammunition and magazines and the end result will ensure a decidedly superior weapon system for our war-fighters.”

Ron Cohen, President and CEO of SIG Sauer, said, “We are both humbled and proud that the SIG Sauer P320 was selected by the U.S. Army as its weapon of choice. Securing this contract is a testimony to SIG Sauer employees and their commitment to innovation, quality and manufacturing the most reliable firearms in the world.” 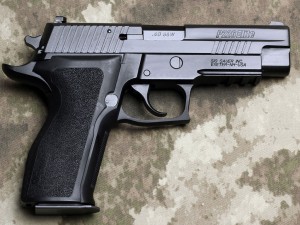 SIG SAUER P226 ENHANCED ELITE 40 S&W – It’s funny how things workout at times. Im referring to a harmless inquiry that lead to me purchasing two handguns at one time. I had been longing for a Sig P226 for years as they fit my hand very well and have a spectacular reputation for reliability and performance. looking back I should have known the purchase was pending when I started ordering Mec-Gar magazines for a P226 in 9mm and 40 S&W. Just in case you were wondering what the other handgun purchase was I will end the mystery now. That was a Glock 22. Ill discuss the Glock 22 on it’s own page. Anyhow I had ordered a Mega Machine MA-TEN 308 Upper and Lower Receiver Set from Dave at bbshooting.com and needed to setup the FFL transfer with my local guy, Chris Tasso of Bethany Firearms. While discussing the transfer with Chris I asked for a quick price check on the Sig P226 at which time he informed that some models were becoming difficult to come by and offered to make some calls while I was there. Me began getting the usual distributors on speaker phone to check inventory. My criteria was simple. The Sig P226 needed to be an Enhanced Elite in 9mm or 40s&w. The second or third call revealed the phrase “we have one Sig P226 Enhanced Elite remaining in stock” and on my verbal go ahead I would have the Sig P226 in my hands by weeks end and I did.

The “Enhanced Elite” models take the same features common to all Elite series pistols and combine them with the ergonomic one piece reduced reach grips used in our E2 pistols. Available in both P226® and the updated P229®-1 (using the same slide configuration as the P229 E2), these pistols bring the advantages of the one piece modular grip to a wider audience.P226® & P229® 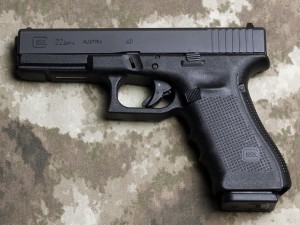 No sense rehashing what I wrote previously about the Sig Sauer P226 Enhanced Elite 40S&W, But lets just say I was caught in the moment, faced with the difficult decision of purchasing a hard to find Glock 22 Gen 4 at an awesome price. What would you do?

In all honesty I was never much of a Glock fan as the Glock design never seemed to fit my hand well but now with the Generation 4 having the option to utilize different backstraps I began to get curious as to whether or not a glock and I can meld. Additionally in recent weeks I was considering purchasing the ISSC .22lr Glock knockoff. So after a little internal debate I decided a better path would be the Glock 22 with the addition of a .22 conversion kit, as they say the rest is history. 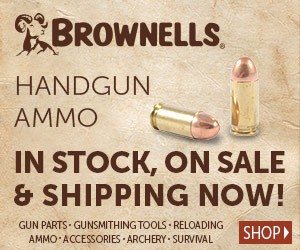 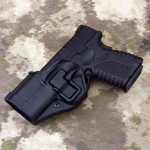 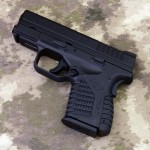 Recently I determined I needed a new purpose driven concealed carry weapon. It need to be small to mid-sized, large caliber, single column, black, moderately corrosion resistant and have a left handed retention holster available. After a bunch of research I came to understand that the Springfield Armory XDS 45 Pistol met all my criteria and as a side note had the best corrosion resistant internals. Interestingly this is my first Springfield Armory firearm. 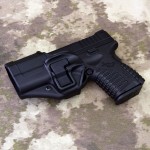 The holster I ended up purchasing is the BlackHawk Serpa Holster With Bl And Paddle for Springfield XDS,Left Hand 410565BK-L for $33 at Amazon