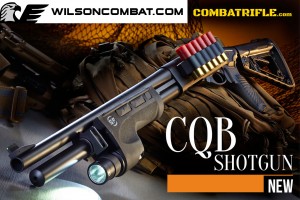 The Wilson Combat CQB Shotgun has been developed at the request of tactical shotgunners looking for the ideal tactical shotgun package with the added adjustability and modularity inherent to a collapsible AR-compatible buttstock. This customized Remington 870 12 gauge has been tuned by our gunsmiths for smooth, flawless function and reliable performance in extreme use. From the low-maintenance Armor-Tuff® finish to our time tested Trak-Lock® fiber optic adjustable sights, this model is all business-on the range and on the street. The Wilson Combat aluminum collapsible stock adapter allows the use of an AR-compatible pistol grip and buttstock and is equipped with QD sling sockets to make adding a tactical sling to your shotgun easier than ever before. A host of other custom options ensure that the Wilson Combat CQB Shotgun is a top choice for self-defense or duty shotgun use. 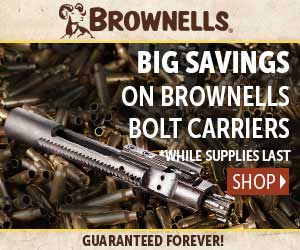 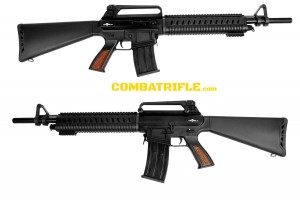 The ALPHARMS 15SA AR15 SHOTGUN is a gas operated, air cooled, magazine fed semi-automatic shotgun. The firearm fires 12 GA X 3” shot shells and uses a proprietary detachable box magazine. The gas system and is located underneath the barrel. The shotgun has a polymer buttstock that incorporates a pistol grip and trigger mechanism. The shotgun is provided with an integral optic/accessory, a post front sight, and a detachable choke/muzzle brake.

The ALPHARMS 15SA AR15 SHOTGUN employs a reinforced polymer lower receiver, with integrated pistol grip and fixed stock, and its controls configuration replicates the AR-15 series of rifles and carbines − both in its civilian and military versions − so to help sports shooters, military personnel and Police operators who may already be accustomed with the quintessential American “Black Rifle” to get easily and quickly accustomed with this shotgun. The same reinforced polymer is used in the manufacture of the M16-A2 style handguard, while the flash hider, the interchangeable chokes and the carrying handle are all made of metal − the handle itself being removable, and mounted over an aluminium MIL-STD-1913 “Picatinny” rail. The “Alpharms” 15-SA operates through a gas system that’s pretty much similar to the DGI system used on the AR-15, with an over-barrel gas tube and a rotating bolt. Feeding is through a prismatic detachable magazine, holding up to six 76mm (3″, a.k.a. “Magnum”) 12-gauge shotshells. 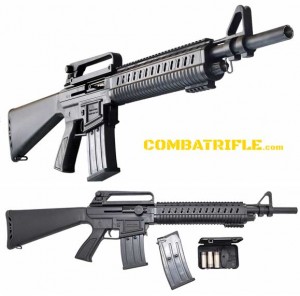 LEADER ARMS AR12 AR15 SHOTGUN – The AR-12 not only resembles the AR-15 / M16 rifle but the control and function are similar. There have been a couple of variations of these on the market in the past with varying degrees of success but with the AR-12 we think that Leader Arms Technologies of Turkey has finally hit on the ultimate combination of design and features.  This shotgun has beautifully styled polymer furniture that has a great feel similar to Houge. Butt stock has a built in recoil pad with an ergonomic pistol grip. Flat top receiver with a full weaver rail . Forearm has a great futuristic and ergonomic design with a quad rail molded in to the top as well as a light attachment molded in to the front of the fore end. Barrel is threaded for choke tubes and firearm comes complete 3 choke tubes and 2 all steel 5 round magazine.