Origins of the AR15 .22lr Conversion

Someone emailed us this excellent information. Thanks to the original author whoever you are.

There are a number of AR-15 conversions and it will not prove possible for me to cover each and every one of them. Instead we’ll look at three: The original Atchisson, the factory Colt, and the current Ciener conversion which is an updated version of the early Atchisson. In addition to these three conversions there is also a USAF M16 conversion kit which functions in a totally different manner (gas action) as well as at least one other US military M16 conversion which will not be discussed here.

Firearms designer Maxwell Atchisson is generally credited with the development of the first marketable AR-15 conversion unit while he was on the staff of the old Military Armament Corp (MAC) during the early 1970s. The original MAC units were available in two versions; One allowing full auto fire while the other provided semi-auto only. Each unit used a special 16 round box magazine which was the same size and shape as a standard AR-15 twenty round magazine but later a 30 round banana type magazine was developed and this design was later copied by J.A. Ciener for use in his conversion.

The MAC conversion itself was little more than a replacement bolt assembly which contained .22LR chamber, recoil spring, extractor and ejector which allowed for straight blow-back operation. To a certain extent the conversion unit functions as a sort of tiny self contained firearm when it is inserted into the AR-15 upper receiver. The entire device was enclosed in a metal sleeve and was inserted as a direct replacement for the standard .223 bolt carrier. Unlike the HK .308 conversions, no special barrel insert was needed to fire .22LR ammo in the .223 AR-15 barrel but sight adjustments were needed since the point of impact between the .223 and .22LR ammo is very different, usually about 3 or 4 inches lower. When first introduced in 1973 these conversions cost a princely $79.95 or about 1/3 the retail price of an AR-15 rifle.

The rights to the Atchisson conversion were later obtained by J.A. Ciener who began marketing a new an improved conversion under his own name. One of the major innovations of the Ciener kit was the removal of the metal sleeve which once fully enclosed the unit. This allowed for much easier access to the internals for cleaning, something which was very difficult with the original MAC conversions. Ciener also offered two conversions: one for semi auto and another which was specially tuned to function properly in full automatic. A 30 round magazine was standard prior to the 1994 Crime Bill, after this 10 round magazines were the only capacity available. With the passing of the Crime Bill the 30 round mags are available once again.

In the early 1990s Colt decided to market a conversion unit of there own to accompany the reintroduction of the new Colt Sporter Rifles, which were simply AR-15s without bayonet lugs and a block installed in the lower receiver to prevent the installation of a Drop In Auto-sear device. The Colt unit was built in something like the shape of the original MAC kit but did not have its internals completely enclosed. The same Colt kit would function in either semi or full automatic rifles and used a small plastic 10 shot magazine. Colt never offered larger capacity mags, although Ciener one produced special 30 round magazines for use in the Colt conversions. It is worth noting that Ciener/MAC magazines will not work in the Colt kits nor will the Colt mags work in the other two units.

In all three cases these conversion units are installed by simply removing the standard .223 bolt carrier and dropping the conversion into the upper receiver. As with all .22 conversions I suggest steering clear of the cheap promotional brands of .22 ammo and sticking with the high quality ammo since this will reduce fouling and make cleanup much easier at the end of the day. Although none of these AR-15 conversions are as complex as the HK conversion unit I still feel that the average shooter should avoid taking them apart. Just soak them in bore cleaner, scrub them down and then dry with a blast of compressed air

There has been a lot of talk about the possibility of the lead from firing .22 ammo fouling or lodging in the gas port/gas tube of an AR upper receiver but .I have never had this problem. All and all I consider the .22 conversions to be a very useful addition for any AR type rifle as is allows for almost limitless shooting at very low cost as well as letting you fire your AR at many indoor pistol ranges where the .223 rifles are generally prohibited. Right now the Ciener kit is the most easily available while the Colt kits are getting harder to locate. Any of the original MAC kits are now considered more collectors items, although they will function fine if you choose to shoot them. 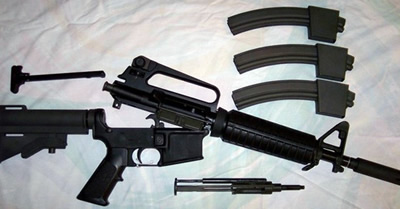