FN SCAR16s Picatinney Damage – I received an email with images from my friend Jim who was completely disappointed with the condition his brand new $3000 FN SCAR 16s arrived from the factory. Apparently when FN builds the SCAR16s rifle they attach an accelerometer to the picatinny rail for the purpose of measuring and qualifying the SCAR bolt cyclic rate. It appears that on Jim’s specimen SCAR the accelerometer was not properly installed which resulted in the hard coat and anodizing being scuffed and removed to bare aluminum in several locations along the picatinny rail. This is more than a simple cosmetic issue. The anodizing and hard coat protects the aluminum from oxidation and galvanic corrosion which in turn protects the FN SCAR16s and devices that utilize the picatinny rail.

Jim was quick to get a call into FN who admitted they had heard of this issue on other SCARS but had not seen it until Jim’s images. FN agreed to rectify the situation at once.

Update: FN decided they would not resolve this for Jim. Probably were concerned with a flood of FN SCAR16s owners looking for similar treatment. In a recent informal poll online it was about a 50/50 split whether this blemish was something to be concerned with or not. Some SCAR owners feel that the rail would like like that after installing an optic mount anyhow so it was no big deal. Well I see it the same as Jim with this rifle. If I spend $3000 for any gun I expect it to be flawless from the factory. If the picatinny rail gets chewed up from an optic I install that’s different and my choice. I expect better from FN. 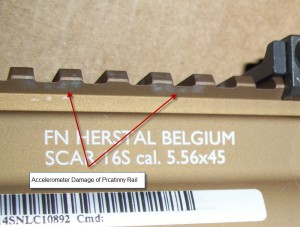 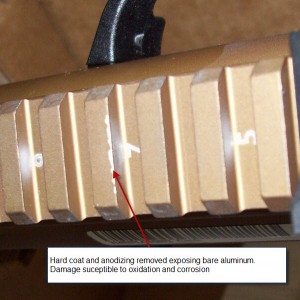 SCAR Armorers Tools
TangoDown has made some tools available for working on the FN SCAR.