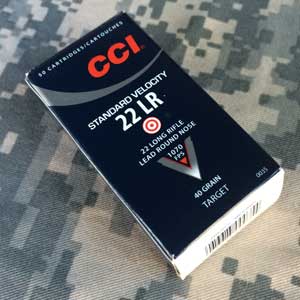 So you drive to the range with your shiny new .22 rifle and a brick of .22 ammo you purchased at the time of the rifle purchase. You setup your targets, you load your magazines, you get into position, line up your sights or crosshairs on the target, pull the trigger, bang you fire your first shot. Once again you get on target, pull the trigger and click, nothing happens. You examine the .22 rifle and you notice one of several things happened.
All of the above issues can lead to a very bad day at the shooting range and frustration and disappoinment with your new .22 rifle. The natural first path to diagnosing the trouble is a magazine swap. Again disappoinment in your new .22 rifle.
So what’s the cause of the problem you ask? Two stories first.
When I turned 21 and got my pistol permit I bought a Smith&Wesson 422 pistol. I grew to despise that pistol because it rarely fired more than once in a row. Fast forward  a couple years later I bought an AR15 .22 conversion kit for my Colt Sporter Match HBAR. that too was a disappointment and pretty much a single shot rifle. Now unfortunately at that time there was no internet to seek for help. I was pretty much left to my own devices and with advice from friends and fellow shooters. None of which had any experience with an AR15 and most had little or no experience with semi-automatic .22 pistols.
It wasn’t until a couple years later shooting with a friend that I learned what my problem was. The problem was the ammunition. His CCI .22 ammunition functioned nearly flawlessly in both guns. The thing was I was living off the same two types of .22 ammunition for years. Years earlier my dad had come across an outstanding deal on Remington Thunderbolt .22 ammunition. He bough cases of it, 30,000 rounds. Our Marlin Model 60 devoured it without hardly an issue. Insult to injury I bought a few bricks of Winchester cheap .22 ammo for the 422 and later to be used with my AR15. Guess what? Ammunition lasts a long time when your .22 will only fire one round at a time.
The short answer to “My 22 Rifle Keeps Jamming” is you need to find what ammunition works best in your .22. Now don’t think you need to run out and buy the most expensive .22 ammunition on the market. I learned that even guns like my Smith&Wesson Model .41 will not digest many premium brands and types of ammunitions.
So now your thinking what can be so different about one brand or another of .22 ammunition? First off many types of .22 ammunition were developed before the landscape was filled with semi-automatic .22 rifles and handguns. The semi-automatics that have been around the longest like the Marlin model 60, Ruger 10/22, Ruger Mark and Browning Buckmark pistols will often embarass new owners of modern .22’s.
While .22 ammunition is made to industry specifications the individual design of the .22 ammunition brands and categories varies greatly. Details such as pressure curves, primer material, rim design and hardness, coatings and bullet shapes all affect function and if you have or plan on having more than one .22 dont be surprised if you do not find a single .22 ammunition that feeds reliably in all your .22’s. Dont forget you dont just want a reliable .22 ammunition you also want accurate .22 ammunition.
What .22 ammunition do I shoot? Well I have a little bit of everything. Typically though I suggest to folks start with Federal bulk ammunition (not American Eagle), the cheap stuff. If that doesnt work move up a few grades. I use the Federal Gold Medal more often than not. I keep a lot of standard velocity CCI, CCI GreenTag and Federal Gold medal match on hand as well. I also have every type of RWS. I have found some to be very reliabe and accurate but the ammunition is less universal across my .22’s. It’s also important to note there are lot variations in ammunition. It seems more noticable in bulk .22 ammunition
After you shoot a few thousand rounds through your .22 rifle or pistol and break it in it’s always worth trying ammunition that didn’t work previously.
By the way I recomend every .22 shooter own a .22 bolt action rifle or .22 revolver to use the .22 ammunition that does not function in your semi-automatics. See what I did there? I helped justify another .22 purchase.