– These rifles were originally built on the basis of German WWII designs which culminated in the famous Heckler & Koch G3 rifles (known in the civilian world as HK-91s). The original G3 rifles were all select-fire, meaning optional full-auto mode. Indeed, the current Century Arms CETME has a position on the safety for full-auto mode that has a stamped-steel stop to prevent travel to that position. With a good bipod, and a heavier barrel, they might have been decent select-fire weapons for expedient duty as a light machine gun, but the overall design is all wrong for that role. They are surprisingly light weapons, and were built as an infantry battle rifle. Without the ability to easily change the barrel, they were almost never used as an automatic rifle in combat. Original H&K receivers were forged aluminum alloy, and CETME rifles started off as cast steel and evolved to stamped stainless steel receivers to greatly cut production cost. Due to the closed-bolt roller-block design, there is no need for a full receiver forging. All of the pressure is contained inside the chamber.

In 1999, a small firm in Arizona began making clones of the German HK-91 using surplus German and Pakistani parts. Shortly after that, a small company called Special Weapons was contracted by Century Arms of Vermont to use their steel casting techniques to produce parts and receivers to be mated with surplus Spanish and various African military rifle parts to produce new rifles. The first production rifles were pretty rough (I saw them at gun shows and they looked like steel versions of dog poop), but being less than half the cost of a decent HK-91 clone and not even close to the cost of a Genuine HK-91, they snagged a good portion of the U.S. market share and had an early reputation of being a “not half bad” clone. It was only a matter of time before the HK-91 clones built with parts from surplus German H&K G3 rifles would evolve into Spanish CETME clones, built on the very similar but cheaper CETME rifles. Interestingly, it was the CETME that came first, and they really don’t “cost” any less to produce, just that the bulk of international surplus stock was obtained at lower prices. Spare magazines for the CETME are so inexpensive that one can consider them disposable when purchased in quantities of ten or more (I bought a bunch for $3 each).

Spare parts can be obtained by purchasing a de-mil parts kit from any one of a number of suppliers for well under $80. Note that many of the parts kits being sold online contain full auto parts that I would not even recommend trying to purchase if you had a CETME rifle. Even if you wanted to risk the scrutiny, you would need to do some modification to some parts for them to lawfully be used in a semi-auto CETME. I wouldn’t even want to touch that issue, let alone own parts that the ATF could consider Class 3 parts with a rifle. This rifle is useless as a full-auto rifle anyway’s, so don’t even dance that dance. Faced with respectable, but not extraordinary sales, the people at Century Arms and probably Special Weapons homed in on what was one of the bigger problems with the re-engineered rifles. That being the cast stainless steel receiver. Original specifications called for a formed sheet metal receiver. A decent functional formed sheet metal receiver came out in mid year of 2002 along with a hefty price reduction in the rifles. Low cost and cheap (really cheap) accessories make the .308 caliber CETME a readily available choice for anyone who is looking for a multipurpose utility rifle that will get banged around on an ATV or behind the seat in a pickup truck.

Century Arms Cetme Info – All CETME rifles, like the H&K G3, are a roller lock, delay blow back, design with fluted chambers for reliable functioning even in the worst conditions. These are built using a precision cast, 17-4 stainless steel receiver. This receiver is produced using the latest vacuum cast technology by one of the leading aerospace casting firms in the U.S.A. Each casting is hot straightened to ensure flawless functioning and heat treated to 42-47 RC for superior strength and wear resistance. The rifle is finished with a baked on gray/black paint just like the H&K process. Original H&K G3 and Model 91 rifles come with H&K designed 20-round steel magazines, which were later modified to the same specs but made out of aluminum. Spain made a different magazine for their CETME version that has a different set of external ramps for feeding and magazine engagement, and also sports a visible forward banana-bend compared to the straight 90-degree G3/HK91 mags.

Magazines – Century Arms provided one original Spanish CETME 20-round steel magazine, and one G3 20-round steel magazine. I bought a slew of H&K 20-round aluminum magazines. Not all of them will properly fit of feed, but they are cheap enough to just find out which ones are good and then just toss the ones that don’t. Both G3 and CETME mags are decent enough to get the first ten rounds into, and then they are a little difficult after that. Strong fingers and lots of scar tissue near fingernails is desired. They both have really strong magazine springs, and if you mis-load a round, you really need to show it who is boss. H&K G3 mag was more fun to work with. Surprisingly, it fit together in the mag-well of the CETME better than the CETME magazine, too.

Firing – The bolt is engaged externally on the top left of the barrel. Not the best place for either a “lefty” or a “righty” actually. As a “righty,” I held the pistol grip and reached out and racked the bolt with my left hand. Nice and crisp retraction of the bolt, and I could see that a round was stripped from the magazine when I let the bolt go home. The first round was let off with a classic 2-stage military trigger. It took about 2 lbs. on the first stage to take up the slack, and then a pretty crude 7-lb. trigger break on the second stage. About what I expected, actually. The CETME/G3 trigger can be refined, and I will send all the fire control pieces into the garbage and buy a new set made of steel alloy parts that can be honed to a better trigger break. That will cost about $100.

First Magazine (20 rds): After one round that chambered, I had about a 1:5 ratio of successful rounds fired to rounds that I had to eject with their firing pins dented and I threw them off the range. Second Magazine: about 1 round fired per 4 rounds attempted. The tolerances between the receiver and the locking lugs was rather tight. This was okay. I put some expedient synthetic grease on the sides of the bolt behind the receiver rails. Third Magazine: about 1 round fired per 3 rounds attempted. The bolt is finding its place in the receiver. Fourth Magazine: 3 fired cartridges followed by a  stovepipe jam and ejection failure. Fifth Magazine: 20 fired cartridges. Sixth Magazine: Conclusion, no more malfunctions, the bolt has found the groove in the receiver and the locking lugs.

I shot this rifle from 50 yards out to 100, 200, 300, 400 and 600 yards. The sights are combat-adequate and are right on the money. Not all of the Century Arms rifles have sights that work out of the box. Apparently it is a crap shoot whether you get a good one or not.

This is a seriously nice knock-off of a true $1500 HK91 rifle. Break it in properly first before you ever plan on using one for serious work, and make sure it feeds okay with the magazines you have. Note that standard CETME mags as well as HK G3 mags both need a solid “rap” to seat properly in these rifles. Don’t be shy about smacking the mag home. Failure to seat a mag properly will result in a bolt riding right over the next round and a “click” on the trigger. Not a good thing if you need to be firing. Sights are adequate for medium-range combat. Don’t even think of putting an optical sight on this rifle. It wasn’t intended to use one, and isn’t designed to accept one unless you monkey around with strange aftermarket scope mounts. This is a true combat battle rifle designed for medium range (200 to 600 yards) firepower chambered with NATO FMJ ammunition that will defeat light-to-medium cover materials and still kill an enemy behind that cover. It is a highly accurate rifle by combat standards, and will relatively shoot the same ballistics whether the rifle is shot cold or hot. A “sniper” rifle it is not, and adding an optical sight just hinders this lightweight rifle and makes it unusually heavy. CETME Value ( Fun Value): Extremely High. Buy one of them now, while they are still inexpensive. 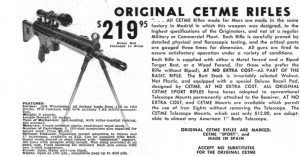 Out of the box the internals of these rifles are very dirty, sticky and possibly filled with metal chips left behind from the machining process. This rifle must be broken down completely and thoroughly cleaned. In fact many shooters who have a CETME that doesn’t function properly most likely didn’t give the rifle the initial cleaning it requires. These rifles perform better the more you shoot them. 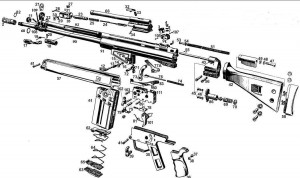