Below has been recreated from an original HK 91 manual. Click the link below to view and download the pdf manual

HK 91 General Information
The Self Loading Rifle HK 91 is the non-military design of the well-known Automatic Rifle G3, adopted as standard weapon by the Deutsche Bundeswehr (Federal German Armed Forces) and the armed forces of several other nations. The HK 91 is like the G3 a recoil operated weapon incorporating a delayed roller locked bolt system and designed for semi-automatic fire. The cartridges are fed from a 20-round magazine. The HK 91 excels particularly because of its excellent firing accuracy. A telescopic sight with mount can easily be attached to the already existing receiving means of the Rifle HK 91.

The rifle is loaded and “safe”.

HK 91 Stripping the Rifle for Cleaning

Before Stripping the HK 91 Rifle

The HK 91 bolt is re-assembled in reverse sequence. Care should be taken with the following:

Re-assembling of the HK 91 Rifle

The rifle is re-assembled in reverse sequence. Insert the re­assembled bolt into the receiver. The locking rollers must be withdrawn in the bolt head. Check the proper assembly of the rifle by pulling back and releasing the cocking lever several times.

For cleaning , the weapon must be disassembled as stated. The barrel must be cleaned after each firing. Each shooter will duly clean his weapon if it has not been used for a longer period. For cleaning and preservation any sort of gun oil in normal commercial usage can be used. Prior to every shooting the barrel has to be freed from oil by a clean pull-through.

The HK 91 Sights consist of the stationary front sight in the front sight holder and the rotary rear sight which is adjustable for windage and elevation. The sight cylinder with Y-notch and diopter holes is graduated from 1 – 4. Figure 11 “1” is the Y-notch and figures 112, 3 and 411 are the diopter holes. The settings “2, 3 and 4” correspond to the distances 200, 300 and 400 m. 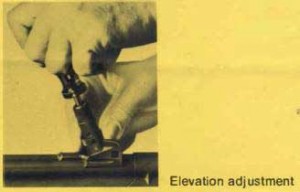 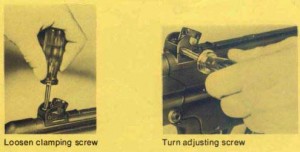 One of the benefits of having a long standing advertising relationship with Brownells is having access to catalog data as well as a deep familiarization with their product offerings. When researching updated website content for .22 pistol conversions I happened upon the HK HK P7K3 22LR kit. Now if you happened to click the link to the left you too will probably be taken back by the price tag of the kit. While I am quite familiar with the HK P7 the HK P7K3 22LR variation was unknown to me. I did a little research and found hkp7.com had the info that filled in the missing pieces. It turns out that while Brownells is offering a .22 conversion kit the HK P7K3 was originally a HK P7 designed to shoot three calibers .22 LR, .32 ACP, .380 ACP. Today these pistols complete with caliber conversions are selling in the $3500-$5000 range. At those prices I will never own one but as most know, money is know object if your a true HK fan . 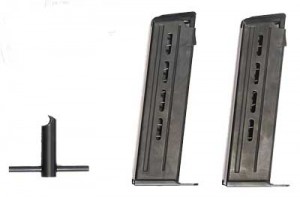 Anyhow according to the author at the site mentioned above the additional slide is only used when converting to .22lr.